Christopher Coke Updated: Aug 15, 2022 4:17 PM Posted: Aug 15, 2022 4:11 PM
Category: Hardware Reviews 0
The original Moondrop Aria developed an almost cult-like following, and it’s easy to see why. At its price point, it’s one of the best performing earphones you can buy. Never content to rest on its laurels, Moondrop has released several revisions and its latest may just be its greatest.
The Moondrop Aria Snow Edition is more than just a cosmetic upgrade. The entire driver has been swapped out and upgraded with a diamond-like carbon version. The tuning has been revised to bring out more details, more texture, and more soundstage. And yes, it’s got a striking new look that’s also more durable than the original. But, even with those changes, one thing has remained the same: the affordable $79.99 price.
We would like to thank HiFiGo for providing the sample for this review.
The Aria Snow is not a successor. Instead, it’s best to consider it like a sister project to the original Aria (reviewed here). While the Aria has become almost legendary amongst budget-conscious audio consumers, the tuning had veered away slightly from Moondrop’s classic VSDF target. Likewise, daily users sometimes noticed that the original paint job, which no doubt looked cool, had a tendency to chip. 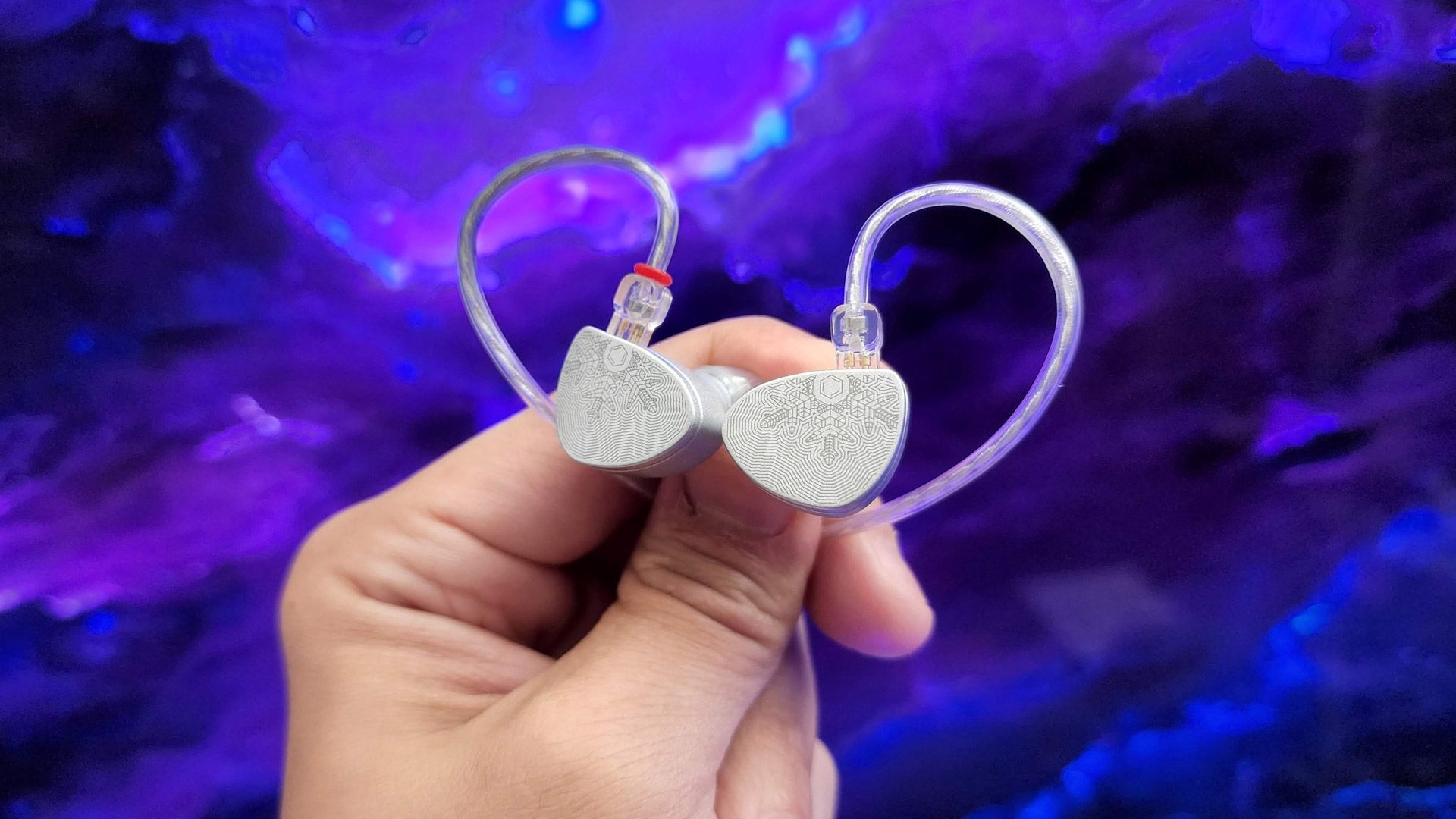 The Snow Edition is the answer to both issues. Starting with the former, it does away with paint entirely. Instead, it features treated CNC-milled aluminum earpieces with snowflakes emblazoned on their faces. It’s unclear what method Moondrop used to apply the flakes (it doesn’t seem to be laser etching) but they are plainly more durable and a simple coat of paint would be, particularly in different climates. They’re filled with intricate detail and look great.
Unlike prior releases, like the Elven Maiden, this isn’t a simple cosmetic revision. Inside, the entire driver has been replaced and subtly retuned. While the original Aria used a 10mm Liquid Crystal Polymer (LCP) drivers, the Snow Edition uses Diamond-Like Carbon (DLC). These drivers are the same size, but the increased rigidity, damping, and incredible thinness of the new driver allows it to pull more detail out of songs while also increasing the sense of space. It’s the same driver, Moondrop says, that was used in the company’s original Kanas Pro earphones, which were more expensive and helped put the company on the map. 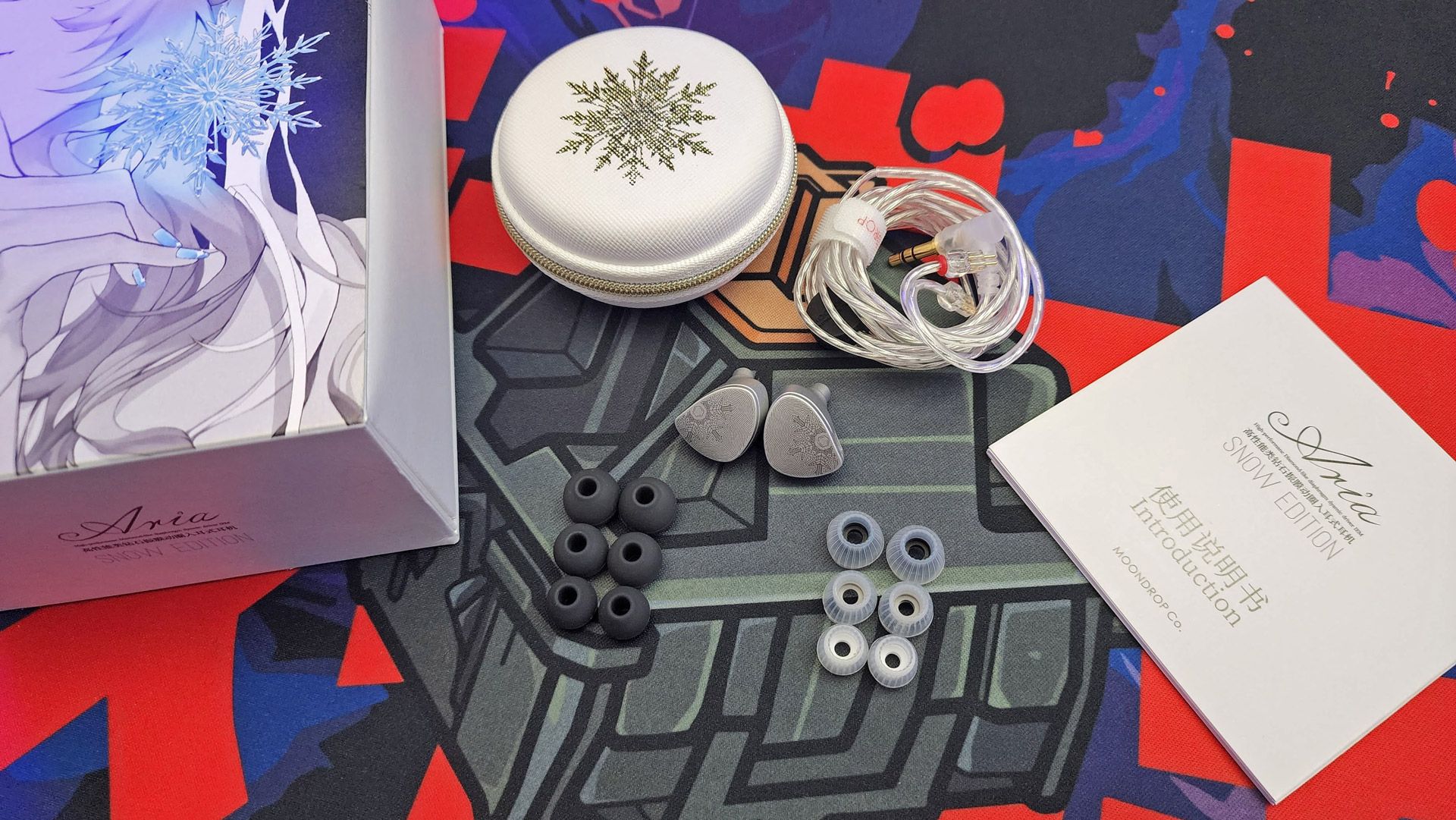 Like the original Aria, the Snow Edition includes an array of accessories in the box alongside the earphones. You have the detachable, 2-pin cable, six pairs of eartips, and a white, snowflake themed travel case. The box itself can also double as a decoration for your room if you’re into anime waifus.
The cable is designed to match the earbuds and is overall pretty good. It’s a high-quality 6N OCC copper cable, plated in silver. It’s thin and has a bit of memory, but that settles over time. At this price point, it’s decent, looks and sounds good, and is easily upgradeable thanks to the earphones’ standard 0.78mm 2-pin connections. It’s one of the few cables I’ve encountered that doesn’t come with a chin slider, however, which I would have like to have seen. 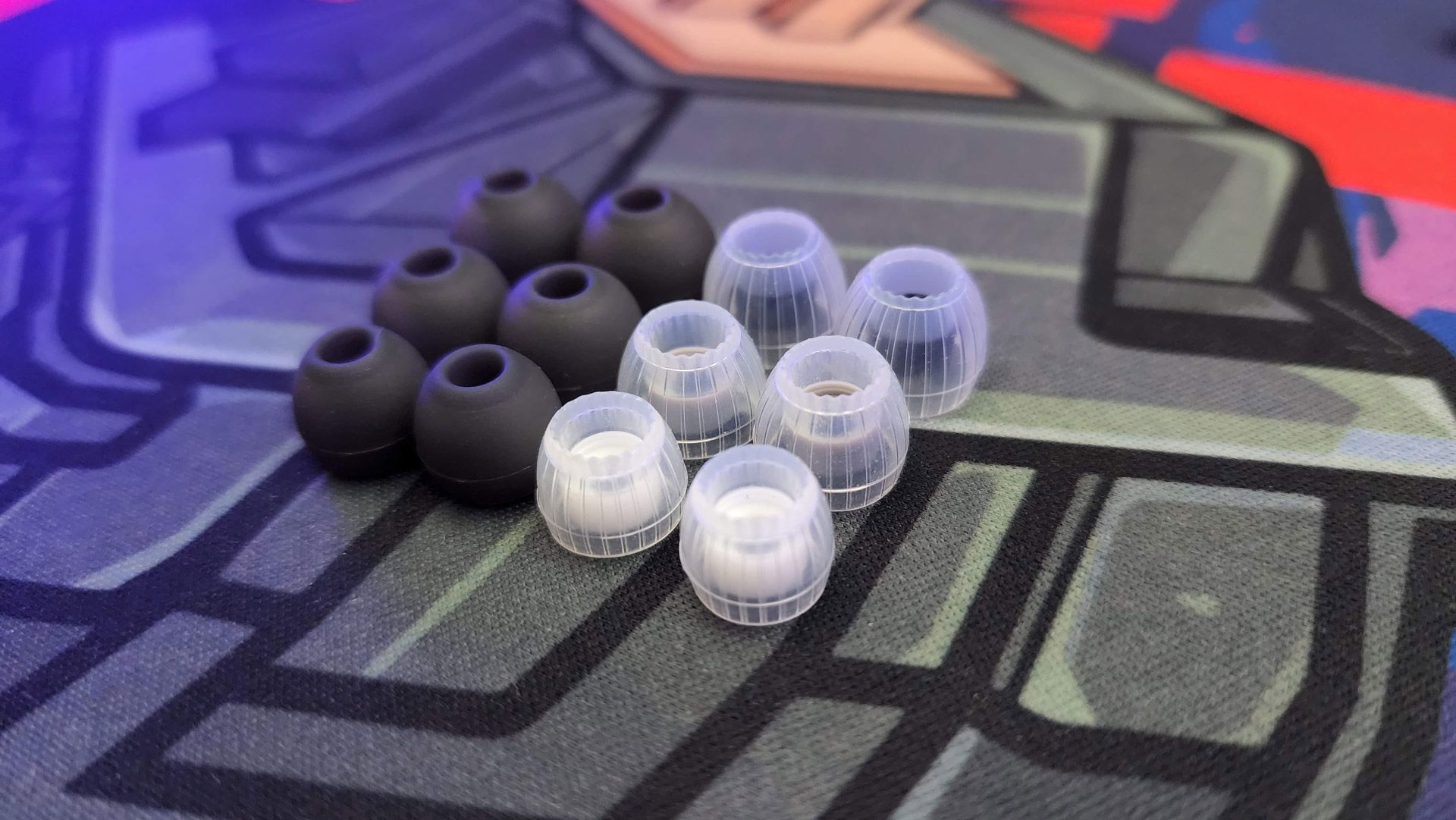 Tips at this price point are usually unremarkable, but Moondrop has included three pairs of its new Spring Tips. These tips originally debuted with its KATO earphones and have become highly acclaimed. They’re very grippy and do a great job of sealing off the ear. They’re designed with internal wave guides that help remove treble resonances that occur with standard ear tips. Unless you’ve swapped many ear tips in the past, this probably isn’t something you’ll have noticed, but you will notice the natural sound these tips are designed to deliver. It’s a subtle but definite improvement, and a set of three costs $12.99 all on their own.
With background out of the way, let’s get into the fit, comfort, and sound.
Like the original Aria, the Snow Edition is a very comfortable wear. With only a single dynamic driver inside, the shells can be quite small and don’t stick out from the ears like hybrids tend to. I found the Spring Tips to provide a steady, secure fit, but they’re on the narrower side. Should they feel loose in your ear, the back-up basic silicone tips should provide an effective alternative. 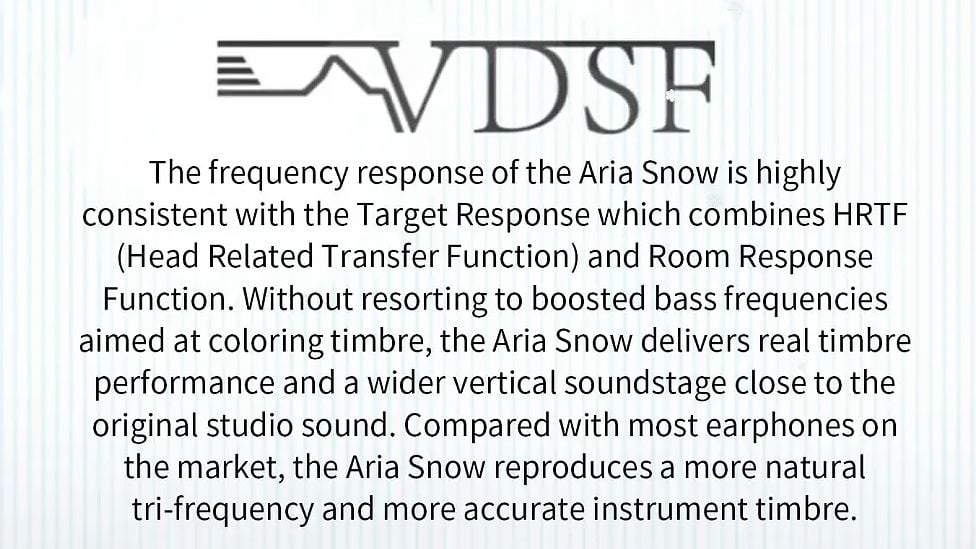 The Aria Snow Edition isn’t your average earphone. Instead of targeting the Harman Curve like so many other consumer headphones, Moondrop applies its usual Virtual Diffuse Sound Field tuning. This target curve aims to emulate how the ears would hear sound in a room with speakers. It embraces realistic timbre and presentation of music instead of artificial coloration. It’s something I’ve become a fan of over the years.
Bass: Bass quantity has been rolled back from the original Aria. There isn’t much rumble to speak of on the SE, but there’s a mid-bass bump that fills out songs and provides some punch to kick drums. What’s there does seem to be an improvement in detail and presentation, however. So, less but better. There is more discernible texture and tightness to the sound, likely due to the shift to a DLC driver (which has increased rigidity compared to the original LCP). Since the original Aria’s were already rather bright, this tuning leans more into an audiophile tuning than the mainstream V-shape that embraces bass and treble humps.
Mids: Male vocals are forward and have an edge that lends itself well to aggressive, raspy singers. Step Out From the Inside by Bullet For My Valentine is a great example of this, as Matthew Tuck’s war-torn vocals have all of the roughness and angst present on higher-end over-ear headphones. This can, at times, make male vocals sound a bit this but is overall very pleasant. Female vocalists face that same intermittency. Adele’s Set Fire to the Rain and Easy On Me were full through and through and really demonstrated how effortlessly dynamic the Aria SE can be. 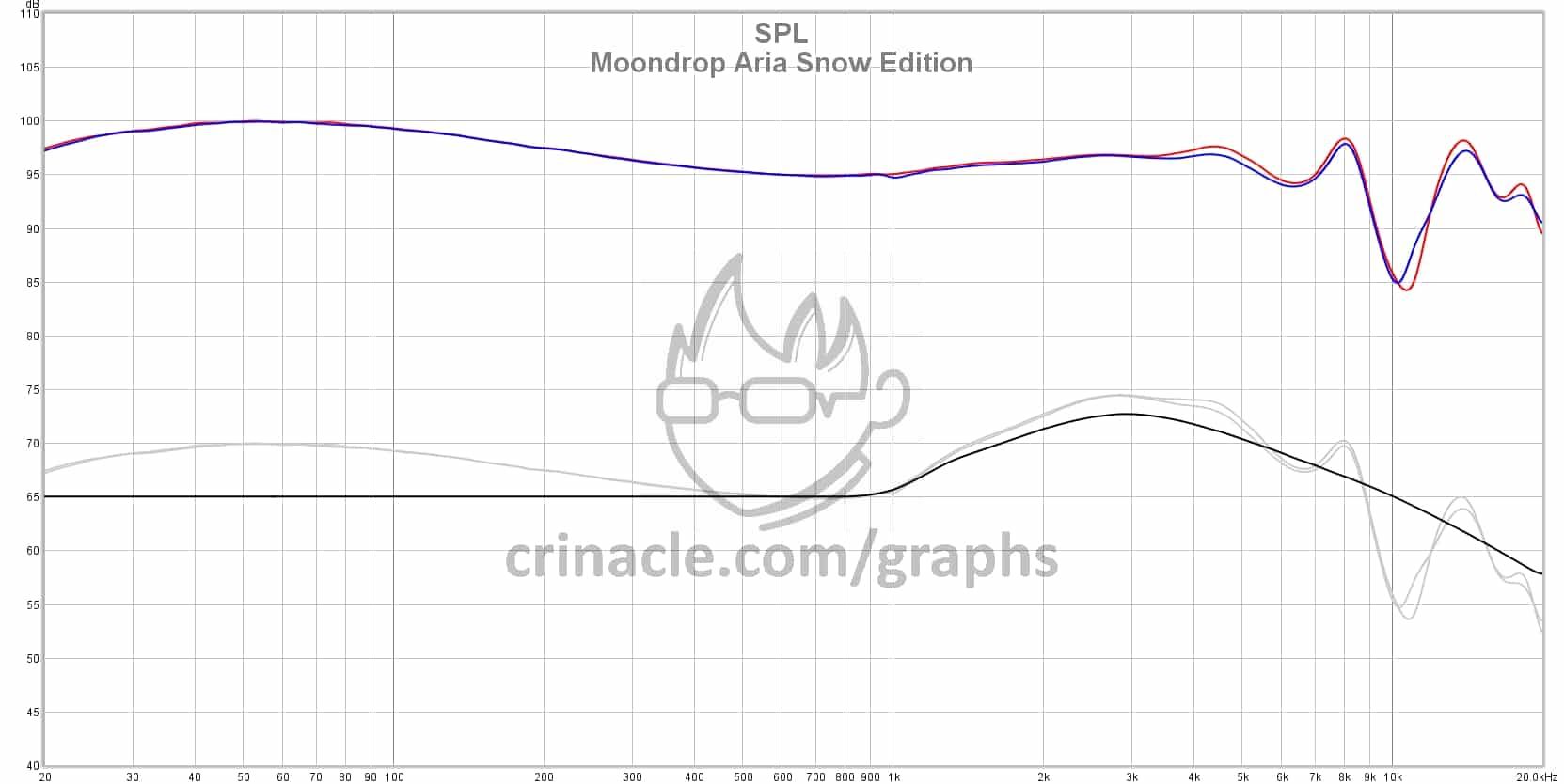 Treble: Treble on this set is decent, but lacks some resolution. Very small microdetails, air, and sparkle are all impacted by a dominant pair of roll-offs in the treble frequencies. Cymbal strikes feel slightly blunted, and while they ring out fine, don’t feel quite as highly detailed as the original Aria. This does make high frequencies sound a bit softer, which cuts out sibilance and sharpness.
Technical Performance, Soundstage, and Imaging: Compared to the original Aria, the Snow Edition has improved technical performance and soundstage. With the shift to the new driver and the revised sound signature, there are more discernible small details. Instruments have a very natural sound — pianos and acoustic guitars in particular. There’s also a slightly improved sense of space. Like the original Aria, layering and positionality are also excellent.
Gaming: While these headphones will perform just fine for games, their brighter tuning lends them more to music than other types of content. While they’re capable of delivering a full sound, you’ll miss that sub-bass when it comes to intense moments of action and sweeping cinematic scores. The improved soundstage will work to their benefit, however, and important audio cues like footsteps are more easily audible with the VSDF tuning. I would still recommend reaching for a gaming headset for sheer fun factor, but if they’re in your bag, you won’t find yourself at a disadvantage as you grind through a few matches on your lunch break. 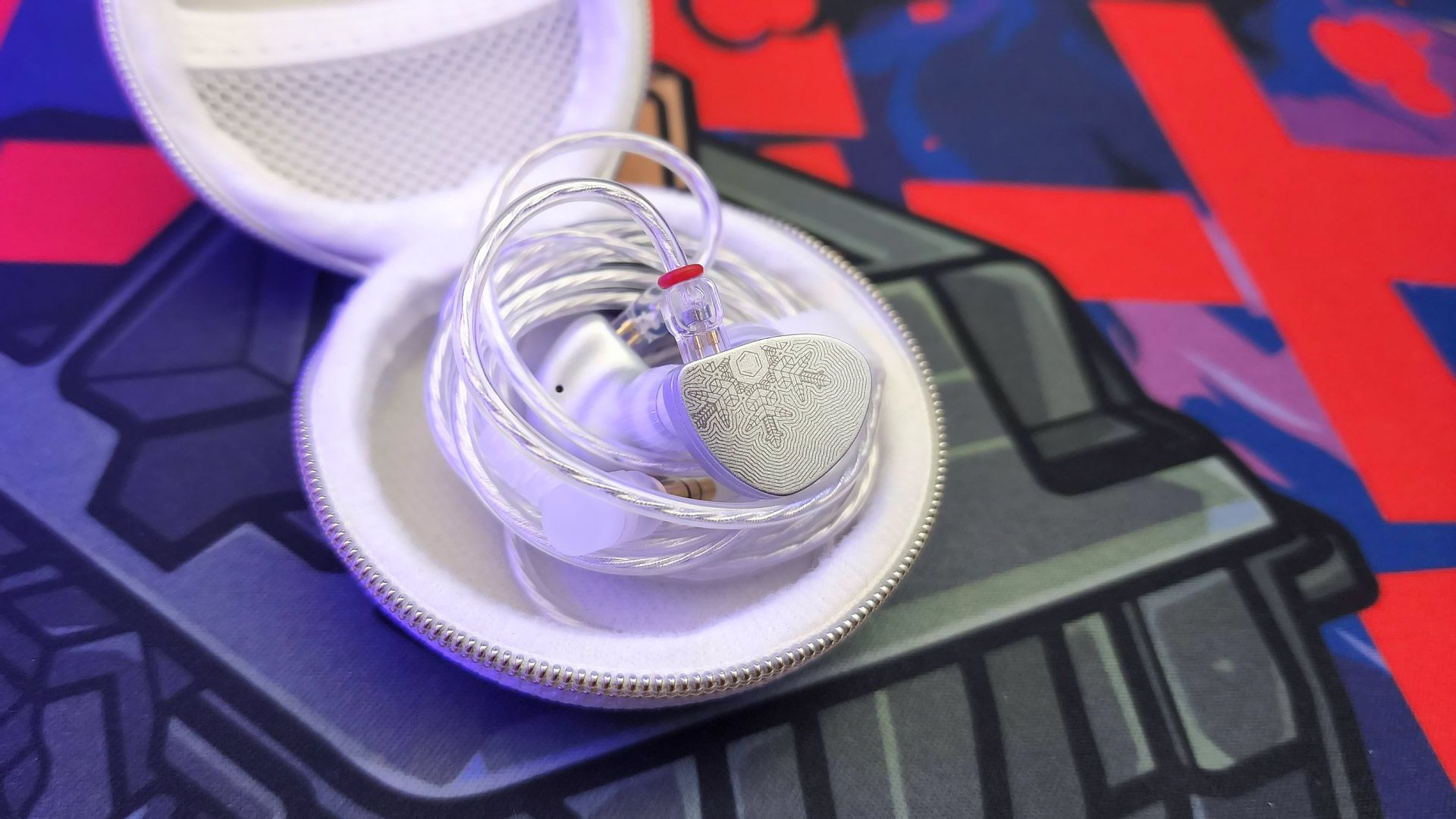 Taken as a whole, the Aria Snow Edition is an impressive earphone that I really enjoyed my time with. I would love to say that they are a clear upgrade from the original Arias, but I don’t think that’s the case. Instead, they deliver a different flavor of an already great budget-oriented earphone. If you want the additional bass, go with the OG Arias. If you’d rather have the improved resolution, wider soundstage, and technical performance, go for the Snow Editions (and if you’re willing to EQ, go with the Snow Edition anyway).
Moondrop has proven over the years that it is one of the leading brands to watch in the ChiFi space. In nearly every price bracket, they have an earphone in competing as a leading recommendation. The Aria Snow Edition is another entry that solidifies that place. This is a great earphone and earns our full recommendation.
The product described in this article was provided by the manufacturer for evaluation purposes.

Chris cut his teeth on MMOs in the late 90s with text-based MUDs. He’s written about video games for many different sites but has made MMORPG his home since 2013. Today, he acts as Hardware and Technology Editor, lead tech reviewer, and continues to love and write about games every chance he gets. Follow him on Twitter: @GameByNight