Facebook Gaming is rolling out a new “Clips to Reels” feature that allows creators to turn their live gameplay clips into Reels. Facebook first announced the feature last month and is now rolling it out to all of its partners.
With this new feature, creators can now cut clips of their favorite gameplay moments down to a vertical, 60-second format. The Reels will have dual views for both gameplay and creator cam. Facebook says the feature allows creators to easily share highlights from Clips and VODs from within their Creator Studio Clips Library.
Facebook says creators can leverage the new feature by visiting the Creator Studio portal on their desktop and navigating to the Clips category. From there, you can pick the clip you want to convert into a Reel. From the drop-down menu, you can then select the “Create Reel” option and trim the clip down to fit the length requirements of Reels and crop the sections of your video to include the footage area where your primary gameplay occurs alongside your face cam. 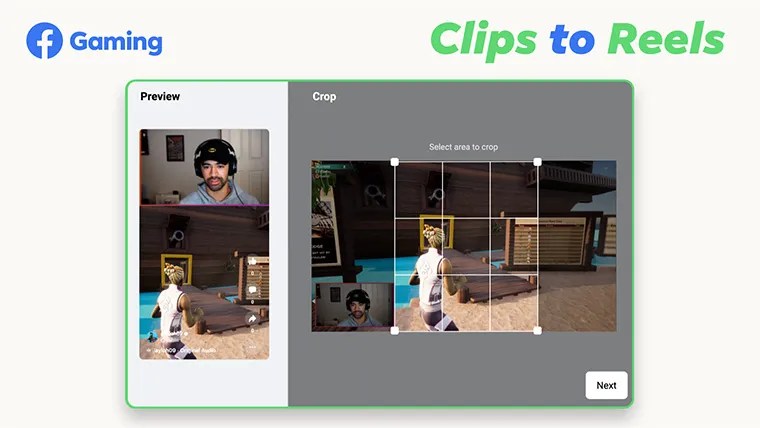 Image Credits: Meta
“The tool will do the rest of the work to align the correct layout for Reels,” Facebook said in a blog post. “When you’re done, simply navigate to the Share tab to preview the Reel, add a caption, include hashtags, and post it directly to your page. If you want to add stickers, music, or GIFs, you can download the completed Reel and then re-upload it to Instagram and Facebook to utilize each apps creative tools.”
The launch of the new feature comes as Meta has been betting big on Reels. As part of its Q1 2022 earnings, the company revealed that Reels now make up more than 20% of the time that people spend on Instagram. Meta will likely provide an updated number during its earnings release on July 27.
Facebook Gaming might not be a hot streaming destination like Twitch or YouTube Gaming, but the social network is steadily adding interactive features to build its appeal.
Meta recently said it was bringing Roblox-like Crayta, a game development platform that lets you build and play games with your friends in real time, to Facebook Gaming’s cloud streaming service. Crayta provides an easy-to-use developer toolkit and makes game creation more accessible, whether you’re building on mobile or desktop. The company acquired Unit 2 Games, which is the studio behind Crayta, in June 2021.
Meta brings game development platform Crayta to Facebook Gaming’s cloud streaming service