header-social
Secondary menu
Image 1 of 9
Despite poor HDR performance, the Dell G3223Q is a good 4K gaming monitor for PS5, Xbox Series X and PC
The Dell G3233Q is the first of Dell’s gaming monitors to adopt the HDMI 2.1 standard. This places it in an elite group of high-end 4K gaming monitors that have launched in the past couple of years. Built for PS5 and Xbox Series X/S owners, these monitors all come with high refresh rates, HDMI 2.1-specific features such as VRR and some form of HDR certification, and the G3223Q is no exception.
However, this particular high-end 4K gaming monitor has an edge: it manages to cost less than its rivals – here in the UK, at least – while still delivering a similar feature set. The result is very nearly an industry-dominating gaming monitor for console and PC, but for one killer flaw.
Buy now from Dell
The G3223Q costs £659 at the time of writing, which makes it the cheapest HDMI 2.1-ready gaming monitor I’ve tested thus far (Acer’s Predator XB323QK was the previous title holder at £700). I should note that in the States, the G3223Q might set you back anywhere from $750 to $1,100, which means that UK gamers are getting a surprisingly good deal.
That gets you a 32in IPS panel with a resolution of 3,840 x 2,160, a refresh rate of 144Hz, a quoted response time of 1ms G2G, AMD FreeSync Premium Pro and generic VRR support and unofficial Nvidia G-Sync compatibility. The G3223Q also has a DisplayHDR 600 certification and eight-zone local dimming.
In terms of connectivity, you’re getting two USB-A 3.2 Gen 1 ports and a single USB-B 3.2 Gen 1 hub enablement port, plus two HDMI 2.1 ports, one DP 1.4 port and a 3.5mm headphone jack (this monitor has no built-in speakers). The stand has 100mm of upwards/downwards travel, 30 degrees of left/right swivel and 21 degrees of backwards tilt – standard fare for these kinds of monitors. In the box, you’ll find HDMI, DP and USB-A to USB-B cables alongside the power supply (no power brick here) and documentation.
READ NEXT: Best monitor deals
I’m fond of the way the G3223Q looks. It’s a simple-looking monitor with clean lines and a lovely vibrant strip of LED lighting that punctuates the grey plastic rear. In fact, it’s all made from grey plastic, but it doesn’t look or feel cheaply made, and it exhibits no flexing under stress. The stand is sturdy and the base is wide enough to accommodate a far larger monitor.
The display itself has suitably thin bezels and, while it wobbles a little, you’ll have to shake your desk quite hard for it to be noticeable. To be fair, I’ve not seen a 32in monitor yet that didn’t nod a little bit in daily use.
Although the port situation is a little on the sparse side, it’s largely no worse than that of the G3223Q’s various rivals. Even Samsung’s mighty 49in Neo G9 has only two USB-A ports on the rear, and that’s almost £2,000. PC gamers aren’t likely to use the additional USB-A ports and console gamers simply can’t – for the latter party, the presence of HDMI 2.1 on the rear of this monitor is the most important thing here. 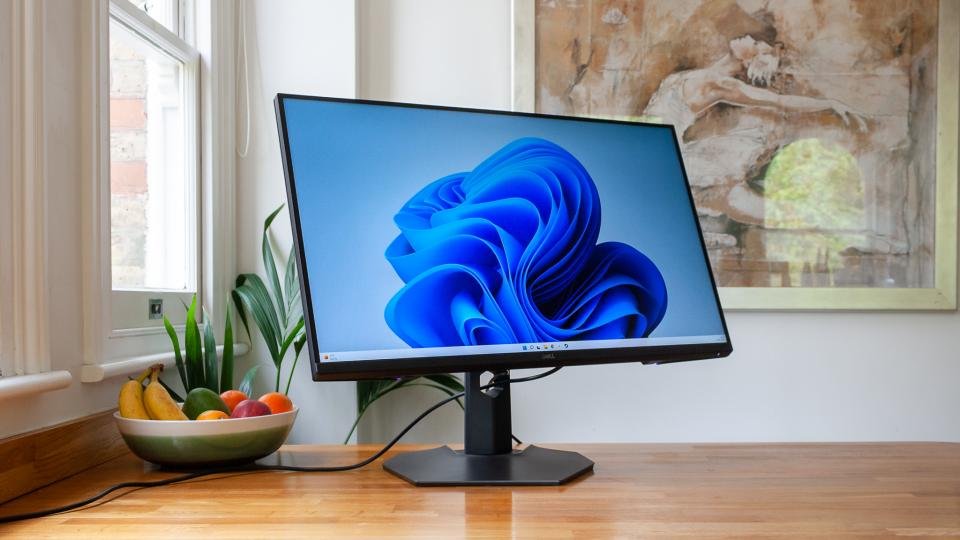 Image 3 of 9
HDMI 2.1 is of course the gateway to 4K at up to 120Hz on PS5 and Xbox Series X, although few games are capable of achieving both simultaneously at present. Anecdotally, however, both console and PC gaming on the G3223Q is excellent. This is a responsive monitor with great motion handling: it exhibits minimal motion blur and no ghosting, until you pump the overdrive setting up from Fast to Faster or Extreme. This is normal behaviour, however, and doesn’t mean you shouldn’t try out the faster settings if you’re keen on shooters.
It’s also stunningly vibrant in SDR. Out of the box the G3223Q managed to produce 132% of the sRGB colour gamut, which equates to 93% of the DCI-P3 gamut and 91% of the Adobe RGB gamut. This means that even the Windows desktop looks eye-poppingly rich and colourful. It’s helped by a peak brightness of 479cd/m² in SDR, which is brighter than more expensive monitors such as the Predator XB323QK and Asus’ TUF Gaming VG28UQL1A could manage in HDR. At 1,037:1, contrast in SDR is good by the standards of an IPS panel.
There are several colour presets available, but as always, we’d largely recommend ignoring them. Photoshop users should note, however, that the G3223Q can be locked into sRGB or DCI-P3 colour spaces: both produced average Delta E figures of 1.5, which is decent enough for a bit of photo editing.
Buy now from Dell
While this monitor is lovely to behold in SDR, its HDR implementation is appallingly bad, and as a result, both the DisplayHDR 600 certification and the eight-zone local dimming are pointless. Supposedly, the G3223Q is capable of reaching 600cd/m², but this is heavily dependent on the content being viewed, and all of the games I played came out dimmer. HDR also fails to make good use of this monitor’s wide colour gamut: poor tone mapping leaves the image looking distinctly dull compared to SDR.
The local dimming, meanwhile, switches on by default in the monitor’s “DisplayHDR 600” mode but largely remains unused. Our local dimming test is a video with a bright, white square/circle that moves around the screen at varying speeds and in varying patterns; only the smallest, slowest-moving object prompted any kind of local dimming from the backlight. When it does kick in, it’s distractingly noticeable: the zones are very slow to react and uniformity is poor, resulting in visible, vertical strips of black space. In essence, there’s very little point engaging HDR at all, which is damning news for a monitor with a DisplayHDR certification and local dimming. 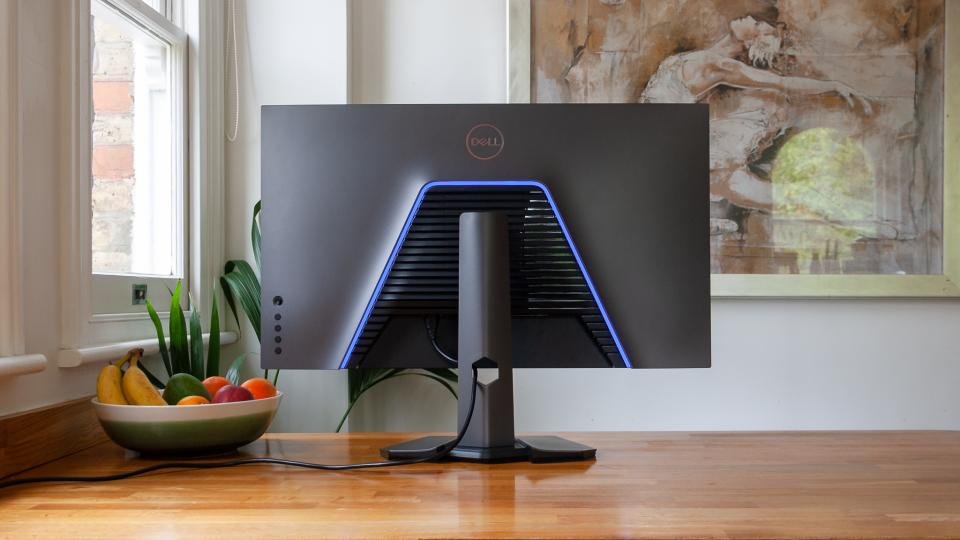 Image 4 of 9
My remaining complaints are pretty inconsequential. It would have been nice to see a USB-C port on the rear: USB-C isn’t all that relevant for gamers, admittedly, but a couple of the next-gen 4K gaming monitors I’ve tested thus far have adopted USB-C for charging connected devices and enabling use of USB-A hubs, which is to my mind a smart move.
The lack of speakers is a slightly more glaring omission, but mostly just because I’d at least expect a pair of weedy 2W tweeters at this price. This means you’ll need a set of PC speakers or a good gaming headset, but I’d recommend these things anyway to improve your gaming experience.
Buy now from Dell
Aside from the bafflingly bad HDR implementation, the Dell G3223Q is a good 4K gaming monitor. It performs well and delivers an enjoyable gaming experience with a decent selection of features, and it does so at an inexplicably good price (in the UK) to boot. If the HDR worked as advertised, this monitor would be a sure-fire Best Buy.
Given that it doesn’t, I’m not sure I can recommend the G3223Q outright, which is a real shame. The problem is simply that without decent HDR, the G3223Q can’t compete with the likes of the Samsung G70A and Asus TUF Gaming VG28UQL1A as a companion for your next-gen console.
However, if you don’t care much about HDR, and you just want a big, bold gaming monitor for your PC, the G3223Q is a good choice.
The best budget smartphones you can buy
The best phone cameras in 2022
The best mid-range smartphone in 2022
The best printers to buy from £47
The best student laptops to buy
HDMI vs DisplayPort vs DVI vs VGA vs USB-C
The best tablets from Apple, Amazon, Samsung and more
The best Windows, Apple and Chrome OS laptops to buy
Best webcam: HD and 4K cams from just £30
The best cheap laptops on the market today
Anker Soundcore Life Q30: Effective ANC on a budget
Huawei MateBook D15: A thoroughly decent laptop
Tenda Nova MW3 review: Cheap and cheerful mesh Wi-Fi
Samsung Galaxy Z Fold 3 5G review: A step above
Razer Blade 14: A fantastic compact gaming laptop
LG Gram Plus View: A gorgeous premium portable monitor
Acer K273 review: A cheap monitor for work and play
Acer Predator XB323QK: A top-notch 4K gaming monitor
HP Z34c G3 review: A great ultrawide office monitor
The best 1440p gaming monitors to buy in 2022
LG Gram Plus View: A gorgeous premium portable monitor
Dell G3223Q review: An almost brilliant 4K gaming monitor
The best monitor deals this month
Acer K273 review: A cheap monitor for work and play
The best Wi-Fi extenders to buy from £35
Copyright © Expert Reviews Holdings Ltd 2022. All rights reserved.
Expert Reviews™ is a registered trade mark.