Analog Devices, Inc. (NASDAQ: ADI) is on a mission to bridge the physical and digital domains of electronics, and the semiconductor company has carved a niche for itselt in the field. It is the largest supplier of analog integrated circuits, the core business that continues to be the primary growth driver though the company has a diversified portfolio. 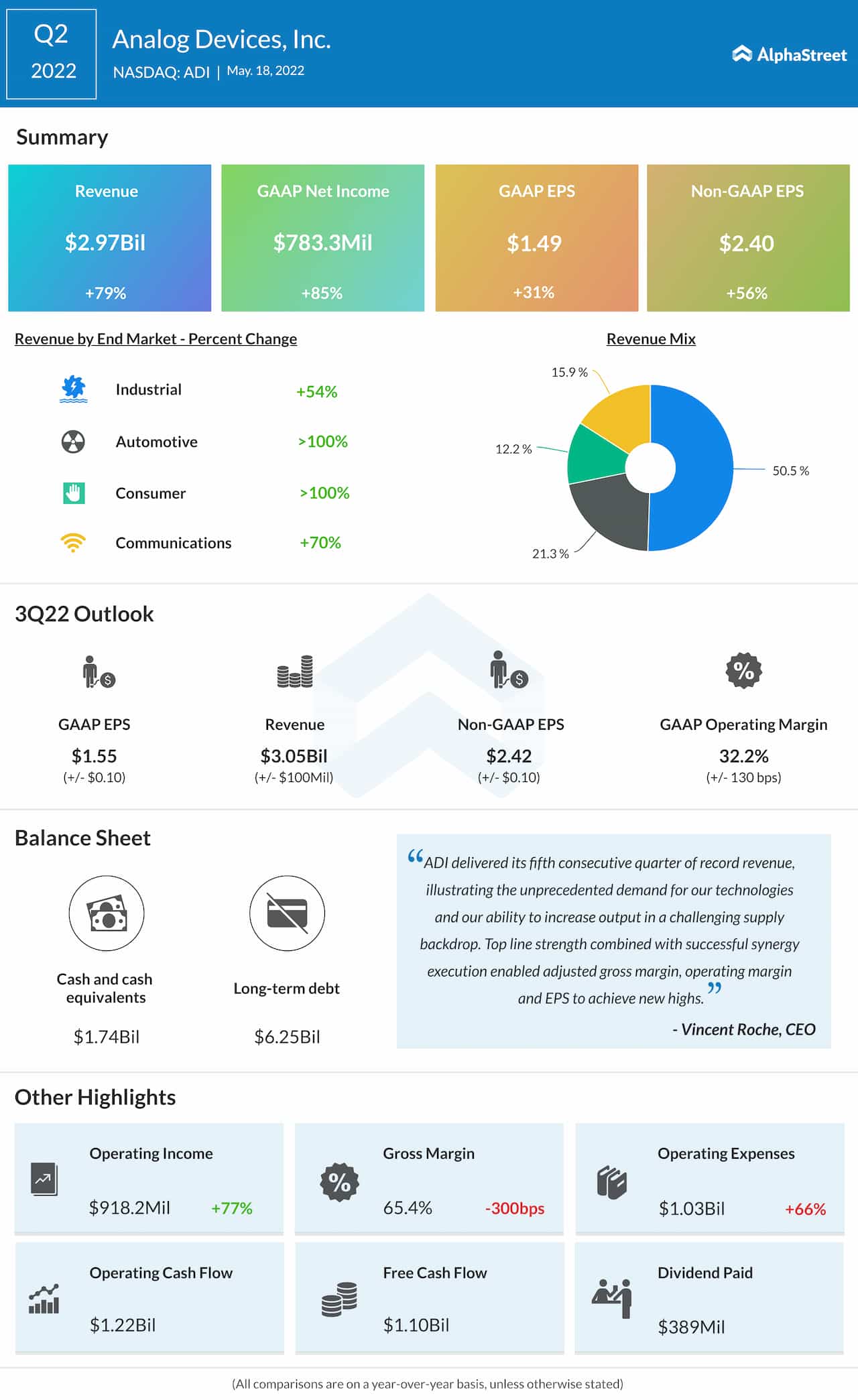 After retreating from the post-earning highs, shares of the Wilmington-based tech firm bounced back and made strong grains in the past few weeks. The uptrend is likely to continue at a steady but modest pace. Since a clearer picture is expected to emerge after next week’s earnings, investors will be keeping an eye on the stock.

It is very likely that the results would be as strong as those reported for the second quarter, thereby lifting the market’s sentiment. So, those who ignore this opportunity might be disappointed later. Overall, ADI is a safe bet with promising long-term growth prospects. Also, the company has hiked dividends regularly, with the latest being a 10% raise early this year. It paid around $390 million in dividends in the most recent quarter.

Going forward, demand conditions should remain favorable, given the fact that Analog Devices’ mixed/digital signal processing ICs are used in almost all types of electronic equipment – from household appliances to entertainment gadgets and automobiles to medical devices. Taking a cue from the steady growth of these industries, the management expects high-single-digit annual revenue growth for the long term.

The growth target will be achieved through strategic investments in capacity expansion and by strengthening the company’s hybrid model. Recently, the bottom line got an additional push from the government’s decision to provide incentives to support domestic semiconductor manufacturers.

The margin performance is strong enough to offset elevated operating costs. However, the highlight is the healthy free cash flow that stood above $1 billion at the end of April. The question is whether the uptrend is sustainable in the current market scenario. While Analog Devices is not fully insulated from the macroeconomic challenges and dip in consumer spending, the company faces less risk compared to most of its competitors.

In the April quarter, it was an exceptionally good show from all four operating segments. Consequently, revenues surged 79% to $2.97 billion, which also came in above the market’s projection. At $2.40 per share, the adjusted profit was up 56% year-over-year. Earnings also beat estimates, as they did in every quarter since early 2020.

“Over the last decade, through both robust organic investments and strategic M&A, we’ve built the industry’s broadest and highest performance analog mix signal and power portfolio. Our offering span from microwave to bits, nanowatts to kilowatts, sensor to cloud, and increasingly from components to subsystems, our vast arsenal of technologies, along with the deep level of engagement and support we provide our customers has earned us the number one positions in analog mix signal, RF and high-performance power.“

The company will be publishing third-quarter results on August 17 before the commencement of regular trading. The consensus forecast is for a 41% increase in adjusted earnings to $2.43 per share, on revenues of $3.05 billion.

After shrugging off a brief slowdown, ADI entered an upward spiral and moved closer to the January peak. The stock, which has gained 18% in the past 30 days alone, traded mostly lower during Monday’s session.

The post ADI Stock: Is Analog Devices a good buy ahead of earnings? first appeared on AlphaStreet.